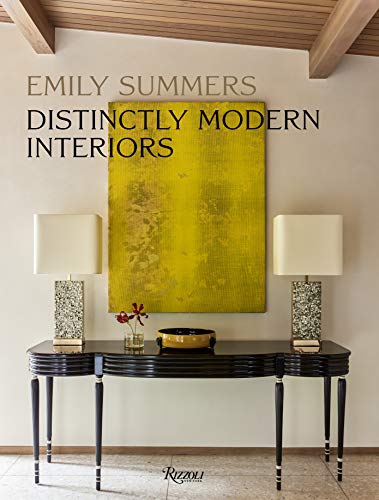 Review ------ "Emily Summers is a champion of modern design, past and present. With a Dallas firm known for interiors that are crisp and edited, yet equally comfortable, she has become one of Texas’s most prominent designers." —New York Times "Twenty years ago, when her daughter, Caroline, a real estate agent, saw a listing for a low-slung 1962 house designed by the architect Robert Johnson Perry in the affluent Dallas suburb of Highland Park, Ms. Summers and her husband, Steve Summers, who worked in finance before retiring, decided they should have a look...Now finally ready for a close-up, the house has a starring role in Ms. Summers’s new book, “Distinctly Modern Interiors,” published by Rizzoli this month. (Two other 1960s modernist houses that the couple bought and restored — one near Palm Springs, Calif., the other in Colorado Springs — are also featured.)" —New York Times "Modern is a style, but not a formula. The much-celebrated interior designer, Emily Summers, sets out in her new book to show that modernism and minimalism are highly flexible aesthetics, styles where your personal preferences can—and should—prevail. This is big news in design. She includes notable examples of her own work, citing, for instance, a 1940s ranch house to her classic 1960s Palm Springs home. The very definition of modernism has changed." —MILIEU MAGAZINE Read more ( javascript:void(0) ) About the Author ---------------- Emily Summers is a renowned interior designer and President/CEO of Emily Summers Design Associates. Beginning her career in 1979, she became known for her collaboration with architects and artists. A member of the AD 100, her work has also been featured in House Beautiful, Vogue, and Wallpaper. She has won multiple awards, including the 2015 Dallas Paper City Design Awards and the 2015 ASID Texas Legacy of Design Awards. Summers has served as Director of Exhibitions and Funding for the Dallas Museum of Art, and she was recruited by President George W. Bush as one of twenty individuals to serve on the Washington-based Advisory Council for Historic Preservation. Read more ( javascript:void(0) )
Show More
Reviews