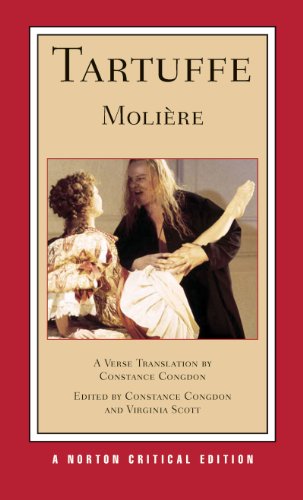 Widely hailed as the founder of the modern French comedy, and known to be a gifted actor, playwright, and patron of fellow actors, Moliere was a towering presence in seventeenth-century France―and the scourge of its political and religious Establishment. His biting satire, witty dialogue, and irreverent staging have made him a favorite with theatergoers for four centuries. This Norton Critical Edition of Moliere’s most controversial and most often-performed play is based on Constance Congdon’s acclaimed new verse translation. It is accompanied by explanatory annotations and nine illustrations of the seventeenth-century farce. “Backgrounds and Sources” draws readers’ attention to the real-life controversy Moliere faced following the opening of Tartuffe, which was immediately banned by the Church. Both sides of the argument surrounding Tartuffe are presented in contemporary documents translated and annotated by Virginia Scott, among them Moliere’s three petitions to King Louis XIV, Pierre Roullé on the monarchy, letters by Boileau and Charles Robinet, and Hardouin de Péréfixe on the law. Assessments of Tartuffe as a production are given in seminal reviews by Harold Clurman and John Peter. Constantin Stanislavsky and Louis Jovet discuss the challenges they faced in preparing for modern productions of Tartuffe. From the wealth of critical commentary on Tartuffe both in the United States and in France, the editors have chosen nine interpretations focusing on the central issues of translation, religion, social history, staging, and international adaptation. Contributors include Nancy Senior, Emanuel S. Chill, Roger W. Herzel, P. Munoz Simonds, Pamela Saur, William J. Beck, Mechele Leon, Wilma Newberry, and Cheryl Kennedy McFarren. A Chronology of Moliere’s life and work and a Chronology are included. 9 illustrations
Show More
Reviews